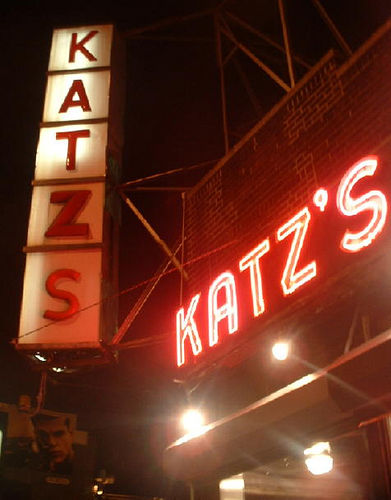 In Welsh, it’s called Hiraeth. There is no English equivalent. It’s a nostalgia one feels, a homesickness for a place that doesn’t exist anymore. For me, it’s how I feel when I visit my old neighborhood, New York’s Lower East Side. I haven’t lived in Manhattan for over 20 years, but I have been back and forth enough to adjust to and even appreciate changes. On the West Side, The High Line is change at its best. I’m even excited about the recently approved Lowline, an underground park-like experience that repurposes an abandoned trolley terminal at the foot of the Williamsburg Bridge. My anxiety over what feels like an Etch-a-Sketch erasure of an historic community wasn’t triggered by things happening below the pavement. My sense of loss really kicked in when I read that Katz’s Delicatessen had sold its air rights.

The phrase air rights struck a nerve. It was a term I had heard before, but this time it seemed personal. I turned to Google—all the while thinking, Yes dad. I know you would have had the answers for me, but you’re not here anymore. None of my relatives are. Not on the Lower East Side. Not physically. But if you can sell air rights, who’s to say people don’t linger in that air long after they’re gone?

I searched for New York City Air Rights. Once known as Transferable Development Rights, or TDRs, they originated with the 1961 revamping of the city’s zoning laws. In essence, if a building adjacent to a construction site is lower than neighborhood zoning laws allow, the developer can acquire the building’s unused air space, add it to his or her project, and erect a taller building. It’s a legal concept captured in the Latin phrase Cuius est solum, eius est usque ad coelum et ad inferos–Whoever owns the soil, it is theirs up to Heaven and down to Hell. While there are those who believe this maxim dates back to Roman Law, many trace it to Franciscus Accurcius, the Italian legal scholar, whose son was invited to England and made it part of British law. That said, there is evidence pointing to a Jewish connection; some say the idea is expressed in the Babylonian Talmud, and can be traced back as far as Rabbi Akiba, whose death is believed to have occurred in 132 A.D.

Once purchased, air rights can be used to build directly over a shorter structure or to add height to a separate construction project, one that is only marginally related to the original shorter structure from which rights were procured. As buildings soar higher, the shadows they cast on the streets below get longer, airflows are restricted and light is blocked. It is not the first time the city has wrestled with this reality and it likely won’t be the last.

As far back as 1916, New York zoning codes were written to, in part, address concerns raised over the seven-acre shadow cast by the Equitable Building. Built in Lower Manhattan in 1915, the Equitable Building was once the largest office building in the world, occupying a full city block at 120 Broadway, between Pine and Cedar Streets. The new zoning laws imposed setbacks from the curb as a way of ensuring that sun always reached the street. As a result, wedding-cake style architecture emerged, giving both the Empire State and the Chrysler Buildings their distinct look and adding to the iconic New York City skyline.

Tenement history also holds cautionary tales about restricting light and air. My grandmother used to tell me about the tenement she grew up in. She shared stories about tenements where people died in fires, from disease, or from rolling off a roof or a fire escape in their sleep. Not only did the organizers behind the Tenement Housing Law of 1901 assert that human beings had a “God-given right to light and air, but they made the following demands—demands that seem relevant to this day:

Not only should the height of new houses be regulated according to the width of the streets, but the erection of additional stories to houses already standing on narrow streets should be forbidden. In a city like New York, where the price of building lots is ever on the increase, the natural tendency is to make the houses higher and higher, until in many of them the amount of daylight which reaches the rooms on the ground floor is so small that only the upper stories are fit to live in, the rooms in the lower stories being too dark and damp for anything but an abode for rats.  Sufficient air space should be left behind the houses to allow thorough ventilation, nor should the corner lot be permitted to cover the entire lot; and streets should be open from end to end, so that all houses have free ventilation both back and front.

The Welsh have a word for it. That sense of loss. Maybe Yiddish does too, but I wouldn’t know. In our house Yiddish was the secret language, something the adults spoke when they didn’t want us to understand their conversation. A language not taught, not passed on–in the name of progress, one might say. To some air rights may look like progress. To me, they look like a step back in time, when only the affluent could be sure they lived above it all, never needing to look down at the shadows and the stifling streets below. With its tenement-tall structures, the Lower East Side, once the most densely populated area in the world, has maintained an expansive feeling, more village or hamlet than a cramped urban jungle. Little by little, my old turf, sandwiched between the East River and the Bowery on one side and Houston and Canal on the other, seems more like Katz’ iconic pastrami sandwich–piled high and swallowed up.